If you hadn’t heard of the Cecil Hotel before the documentary about it dropped on Netflix, it’s likely you have now.

Crime Scene: The Vanishing at the Cecil Hotel charts, in harrowing detail, the grisly establishment where 21-year-old Elisa Lam went missing and was subsequently found dead in 2013.

Now, former guests of the hotel, which was renamed ‘Stay on Main’ in 2011, have revealed what it was really like staying in one of its 700 rooms.

What *really* happened in the Cecil Hotel? It's the Netflix show everyone's fascinated by so here's what went down… What *really* happened in the Cecil Hotel? It's the Netflix show everyone's fascinated by so here's what went down…

Ashley, who gave the hotel one star in her Google review and called it ‘dirty’, said it’s a place she and her husband would ‘never forget’.

“We were not informed about the communal bathrooms/showers, or about any history of the place,” Ashley wrote, referring to the hotel’s infamous past that’s seen at least 16 people die there since opening in 1927.

Another guest, Reggie, who stayed at the hotel seven years ago, said he was only giving the hotel one star because you cannot give it zero on Google reviews.

“This is the dirtiest hotel I have ever been to. After I checked into my room I went back to the front desk to get a refund and they did not give me my money back,” Reggie added. “They claim to have newly refurbished rooms but the room I was given had a window screen with many holes, the bathtub had not been finished and the whole room was dirty and very dingy.” 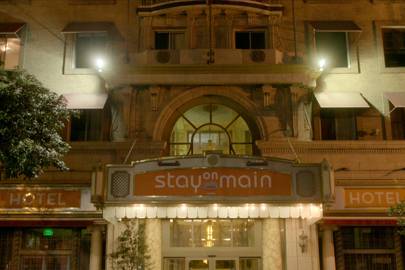 On Google, the Ceceil Hotel/Stay on Main has an average of 3.1 stars from over 1,000 ratings – 33% of these are five-star reviews while 28% are one-star reviews.

One of the five-star reviewers, Kel, said: “Me and my friend needed a quick place to stay on our journey back home. Stay on Main was central to everything, and has a lot of history. The rooms were creepy, I’ll give it that, but definitely made a great story for my experience there.”

Other users commented that there was black water coming from the taps and there were ‘many’ scary noises at night too.

This is how 'American Horror Story: Hotel' is connected to the Cecil Hotel documentary on Netflix This is how 'American Horror Story: Hotel' is connected to the Cecil Hotel documentary on Netflix

If you were hoping to stay at the hotel yourself, Stay on Main is currently closed for renovations, but it will likely reopen after this. The hotel was bought for $30million (£21.2million) in 2014 by hotelier Richard Born and it closed in 2017 to start renovations.

At the time, plans were to completely redevelop the interior and add a gym, lounge and a rooftop pool.

Play this song [Intro] Dum-dum-dum-dum [Verse 1: Nick Jonas] The snow on the ground, the love in the air Sleigh bells are ringin’ This is what it’s all about The fire is warm, the angels are singin’ [Pre-Chorus: Nick Jonas with Joe Jonas] And I don’t wanna miss a single thing Don’t wanna put end to all this cheer […]